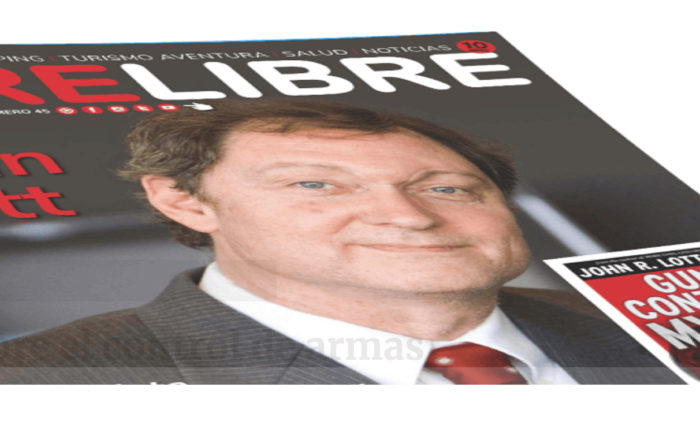 This interview with the Argentine media outlet Aire Libre was conducted with Dr. John Lott back in early August, before he left the CPRC, but it has only now been published. The original article was published on October 20, 2020 in Spanish. Below is a rough translation using Google search.

“John Lott has few peers as an analyst on public policy issues,” said Milton Friedman, winner of the Nobel Prize in Economics a few years ago, about the work carried out by the researcher and greatest exponent in the defense of the rights of legitimate weapon users.

Friedman’s opinion, far from being exaggerated, describes Lott’s personality from head to toe. It is that, without lukewarm speeches or false political corrections, the researcher has been carrying out a tough fight for several decades to dismantle the myths about gun control.

From his place as a scientific popularizer, faithful to his empirical profile, Lott has become an author with a prolific work at 62 years of age. He has published over a hundred articles in peer-reviewed academic journals and has written nine books, including “More Guns, Less Crime,” “The Bias Against Guns,” “Freedomnomics,” and recently, “Myths About Gun Control.”

In this exclusive interview, the first given to an Argentine media, he begins by telling the reason for his dedication to demolishing the myths about the possession and carrying of weapons in the hands of civilians: “I realized the misinformation that there was on the subject. That, I think, is what endangers people’s lives ”.

And he adds: “There is a lack of information on how someone should respond when faced with a criminal or how mass public shootings should be stopped. The only safest course of action is to have a weapon, especially for the weakest. And he reveals about the mass shootings: “94% of those attacks in the United States take place in areas where weapons are prohibited.”

“I had never been very interested in weapons, I only got involved by accident,” says Lott about how his relationship with the world of weapons was born. Linked from a young age to teaching and the world of the classroom, the political commentator explains that it all came about when a group of students asked him if he could talk about gun control. “That forced me to read some of the academic literature and I was surprised at how poorly the research was done,” he recalls.

While currently a contributor to The Hill newspaper and a Fox News columnist, Lott also serves as Chairman of the Crime Prevention Research Center (CPRC), a non-profit organization he founded in 2013 that aims to provide scientific evaluation objective and precise both the costs and benefits of the possession of weapons, as well as police activities.

Aire Libre (AL): According to your research, there is an erroneous and widespread belief that an increase in weapons in the hands of civilians generates an increase in crime rates. Why do you think this happens?

John Lott (JL): I always ask people if they can name me a place in the world where all guns have been banned and homicide rates have dropped. The answer is no. Every time weapons have been banned, the rates have increased. Developed countries with the highest gun ownership rates have lower homicide rates. Typically, when people make comparisons, they generally choose a small, select group of countries. Still, there are real problems with this data that skew the result against the more guns, less crime hypothesis. For example, people don’t understand the differences between murder and homicide rates. If a woman kills a serial rapist who breaks into her home, it is not the same as a thief who murders someone she is assaulting. I have never understood why you want to group these two types of cases. I don’t think making purely cross-sectional comparisons makes much sense, and in my books I explain how that can be very misleading.

AL: In your latest book “Myths About Gun Control,” you used as a subtitle How Failed Politicians, the Media and Failed “Studies” Have Twisted the Facts About Gun Control. Why do you think there is so much opposition and resistance from these groups?

JL: It’s hard to get into people’s minds, but I think a lot of that has to do with how much you trust people to make decisions. In the United States, liberals generally don’t trust people to make the right decisions. For example, in the case of social health insurance, former President Barak Obama adopted a program that did not let people choose what was covered and how that coverage worked. If you don’t even trust people to choose what your health insurance will cover, is it any surprise that you don’t trust people and the use of guns? Across the world, billionaires fund opposition to gun owners. The two biggest funders driving gun control are Michael Bloomberg and George Soros. The irony is that these individuals have armed bodyguards 24 hours a day to protect themselves, but they do not believe that average people should have weapons or have the option to protect themselves and their families.

AL: How do you see the situation in Latin America in relation to arms control?

JL: While security forces are extremely important in protecting people, it must be clear that, in Latin America, even when the police are effective, they almost always arrive at the scene of the crime after it has occurred. In much of Latin America, the police simply cannot do their job. The rates of murders and other types of violence are astronomical. In those cases where the police are simply overwhelmed, there should be no choice but to let people have the option to protect themselves and their families. When weapons are strictly regulated, only criminals will have them.

AL: What active policies do you think could be permeable among politicians?

JL: There is an irony in the matter of politics. For example, in the United States politicians who are in favor of gun control are the ones who rant the most against the police. If they spent more money on the security forces and not on restricting their actions with senseless regulations (like filling out a huge form every time they talk to civilians), there would not be so much crime and people would not feel so bad. The population needs to have weapons to protect themselves.

AL: How did the idea of founding The Crime Prevention Research Center (CPRC) come about?

JL: Hundreds of millions of dollars are spent on gun control research each year. Still, there is a huge amount of misinformation, so I thought there was a real need for academics who knew how to use data correctly. The idea was to try to educate people on these issues properly.

AL: Tell us a little about the CPRC and if you think it could be developed in other places.

JL: It is possible that a similar organization could be developed if academics are found who are willing to investigate and address politically incorrect topics. However, the academic world tends to be quite correct on these issues.

1- You have a weapon, you have a problem.

2- The exercise of armed violence is hidden in the old models of patriarchal domination.

JL: My research has consistently shown that, for example, women benefit much more than men from having weapons to protect themselves. The reason is simple: when a male criminal attacks a female victim, there is a much greater difference in strength than when a male attacks another male. The presence of a weapon makes a much bigger difference in a woman’s ability to defend herself. Too often when women are faced with the threat of violence, the advice is to move, change jobs, or hide. Systematic efforts have been made to scare women, in particular by exaggerating the risks of having firearms in the home.

3- The highest number of deaths and injuries occurs during interpersonal, gender or cultural hatred conflicts.

JL: About 90% of adult killers have a violent criminal record. The numbers are similar for juveniles. They are usually men with a relatively low IQ and a long history of relationship problems with other people. Ordinary people don’t suddenly go crazy and kill others. If you really want to care about people in particular, you have to worry about those with violent criminal records, not about law-abiding gun owners.