From kindergarten to college, boards of education and university administrators are responding to demands to defund the police in the aftermath of the death of George Floyd, and are reassessing how their facilities are policed.

The issue of police in schools, whether in K-12 or in higher education, has become emmeshed in the partisan and often racially tinged discussions of the overall roles of police. While student activists and some faculty members accuse campus police of racial insensitivity and of targeting minority students, the renewed focus on police in schools currently seems to be aimed at hurting police through budget cuts, with little discussion on crime control.

Advocates for removal of police from campuses believe that most incidents involve marijuana; alcohol, or non-violent, property-related crimes. Their demands include transferring funds spent on policing to counseling and violence prevention programs; limiting campus police from patrolling outside the campus, which, for urban universities, are often minority communities; curtailing interactions with local police; and disarming campus police.

According to the most recent Justice Department report, more than 4,000 campus departments employ about 32,000 police officers. Approximately 90 percent of public colleges and universities employ police; they are generally armed, have jurisdiction beyond their campuses, and have formal financial agreements with local law enforcement agencies.

Representative of the harm-the-police-through-budget cuts advocates, the Center for American Progress recently suggested that colleges sever the agreements to hurt local police if the police refuse to accept restrictions such as limiting the types of force officers can use on campus, disclosing data on officer complaints, and banning officers who have excessive force complaints from campus.

The University of Minnesota (UM) became one of the first to act.

Within a month of demonstrations over Floyd’s death it scaled back its contract with the Minneapolis Police Department (MPD) for event coverage and specialized services. UM ordered its Department of Public Safety to limit interactions with the city police department.

Although UM promised that the $40,000 taken from MPD would be used for mental health and sexual assault prevention programming, at least some of the funds are likely to pay for additional duties of campus officers who will now cover events without assistance from Minneapolis officers.

It remains to be seen whether the interruption to campus and local police cooperation will complicate investigations of off-campus crimes against students or faculty.

At Northwestern University (NU), the overwhelmingly white students who claimed to be protesting to save Black and brown lives, demanded that the university disarm, defund, and disband its police force. Nightly protests on the Evanston, Il., campus and in the town resulted in local police in riot gear protecting the residence of university president Morton Shapiro.

Initially praised for standing up to student demands, in October, Shapiro, who is an observant Jew, was criticized for claiming the protestors were anti-Semitic after they referred to him as a pig.

In nearby Chicago, the primarily minority student body at the University of Chicago, located on the city’s south side, demanded that campus police authority be limited both on campus and in the surrounding area. 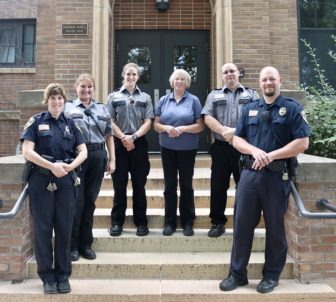 In Baltimore, students and faculty, led by a group of Black professors, have spoken and demonstrated since 2019 against Johns Hopkins University’s plan to convert its security department into an armed police department. The protesters argued that, rather than improve student safety, it would create an insecure environment for minorities. They failed to gain traction until this summer when, after renewed and more vocal protests, university administrators cancelled plans to arm the officers.

Around the country, students and faculty have joined together to push to have police removed from campuses. In New York City, Columbia University, New York University, and Pace University are facing demands to cut ties with the New York Police Department (NYPD). At Pace, a criminal justice faculty member was asked to mediate student concerns.

In New England, Harvard University and Yale are each reviewing why their officers became involved in off-campus activities. For Harvard, the question is why officers assisted at anti-racism protests in Boston; and the Yale administration is reviewing how and why one of its officers was involved in a shooting of a black couple during a traffic stop.

Breaking the School to Prison Pipeline

While colleges and universities have been slow to respond to defunding demands, K-12 school boards have been aggressively removing uniformed officers from schools. The goal of getting police out of the schools as a way to sever what the American Civil Liberties Union (ACLU) and other have dubbed the school-to-prison pipeline remains a major focus. So is increasing funds for social service and mental health services.

What is new, is the goal of punishing police departments by slashing their budgets.

When Milwaukee schools cancelled their contract with the city’s police department, the Center for American Progress crowed over the more than half million-dollar loss to the department, just as it had over the loss to the funds to the Minneapolis Police Department when the UM limited police presence on campus.

Like UM, the Minneapolis school board voted unanimously to end its SRO contract with the city’s police department.

Days later, Portland, Ore., discontinued the district’s program when part of the $10 million in cuts to the police department’s budget included disbanding the school unit. Although the school system had not been paying for the police and therefore was not actually saving money, the school superintendent said he would increase spending on counselors and social workers.

The Charlottesville, Va., and Denver school systems pledged to end their contracts with local police ($300,000 in Charlottesville and $750,000 in Denver) and will put the funds toward alternative safety programs and mental health resources for students.

In California, both the San Francisco and Oakland school districts have cut their relationship with their local police departments. Burlington, Vt., whose city council declared racism a public health issue, has called for officers to be removed from schools by Spring 2021. Bridgeport, Ct., is considering doing the same.

The Los Angeles school district cut its police budget by about $25 million.

The Los Angeles school district cut its police budget by about $25 million, a 35 percent reduction. It is considering totally phasing out police in its schools, although little of the discussion has been about whether crime might increase.

In New York City, actions to defund the NYPD involved transferring $1 billion to other city agencies. This included a $400 million shift of funds to eventually return administration of the more than 5,000 unarmed school safety officers from the NYPD to the Department of Education, where the school safety program was originally housed. In addition to the safety officers, approximately 200 police officers are assigned to schools.

The idea of school police officers has been traced to Flint, Mi., starting in the 1950s and growing in response to a perceived increase in violence and to school shootings. The process was formalized in 1994, when the federal Community Oriented Policing Services (COPS) provided financial support to SROs. In 2019, the COPS School Violence Prevention Program (SVPP) awarded $25 million for the program; funding for 2020 was double that amount.

New York began assigning police—mostly to high schools—in the late 1950s. It was the era of Blackboard Jungle, a book and film about teachers in an interracial inner-city school, and High School Confidential, in which a young officer infiltrates a school to investigate a narcotics ring.

My own interracial inner-city New York City high school had a police officer assigned to break up fights and roust truants from the local soda shop. Students knew him; our yearbook contained his photo and a poem dedicated to him.

Today, SROs are generally local officers assigned part- or full-time to a school for the dual—and sometimes still contradictory—roles of maintaining order and fostering better police/student relationships, just as Yale hoped the original campus police would do.

They are sometimes supervised by the school but more often by their departments. Some states, particularly in the south and southwest, have school district police departments that are independent of local police. Like campus police, they are part of the school system and report not to the local police, but to the school administrator.

Debates over the presence of police in schools are not new.

Some students and faculty, supported by civil rights and civil liberties groups, including the newly-empowered Black Likes Matter (BLM) movement, are increasing demands that routine policing of schools end, and that police enter schools only to address threats to physical safety.

Others, such as Kentucky legislators this year, amended and strengthened existing laws on SROs to clarify which facilities must have them and that they be armed, while also requiring schools to employ counselors and mental health professionals.

Advocates for lowering the profile of campus police, cutting contracts with local police, and eliminating uniformed police in K-12 have not presented evidence on whether this will increase or decrease crime in schools. But despite violent crime rising in the cities, crime is not their focus. Their demands amplify those to defund local police, by calling for complete disbanding or at least disarming campus and school police.

School closures caused by Covid-19 concerns have cooled down the rhetoric. But it’s likely to be resumed when students and faculty return to campuses and classrooms. Their calls for decreased policing to bring what they believe will be better outcomes for minority students are likely to result in fewer cops.

Only time will tell whether it will result in higher crime.

Dorothy Moses Schulz, Ph.D., is an emerita professor at John Jay College of Criminal Justice, CUNY, and a retired MTA-Metro North Railroad Police captain. After retiring from Metro-North and before her more than twenty years as a professor of police studies, she was the director of a State University of New York (SUNY) campus security department.