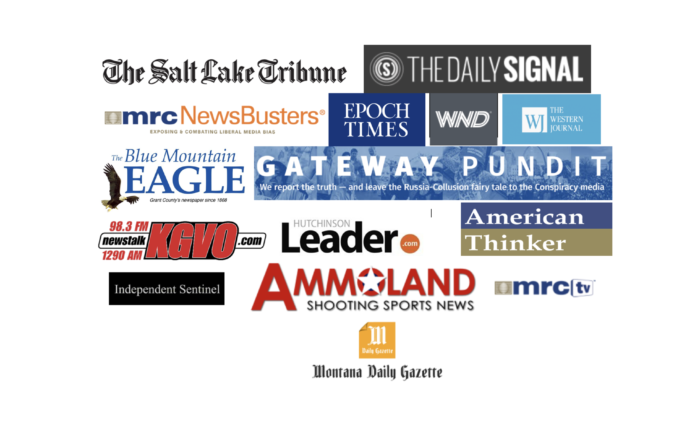 “For each additional year that a concealed handgun law is in effect the murder rate declines by 3 percent, rape by 2 percent, and robberies by over 2 percent,” Lott’s research indicated. . . .

. . . According to the report of the audit in RealClearInvestigations by author and researcher John R. Lott Jr. — president of the Crime Research Prevention Center and adviser to the Department of Justice’s Office of Legal Policy under the Trump administration — the audit effort began when a group of Missoula County voters concerned about the integrity of mail-in balloting formed in October

In November, they approached Republican state Rep. Brad Tschida, who agreed to take on their cause. Together with lawyer Quentin Rhoades, they got Missoula County Elections Administrator Bradley Seaman, a Democrat, to agree to a volunteer-conducted audit of ballot envelopes legally counted in the 2020 election.

The first problem in counting the ballot envelopes? The number that were absent, for starters.

“Without an officially printed envelope with registration information, a voter’s signature, and a postmark indicating whether it was cast on time, election officials cannot verify that a ballot is legitimate. It is against the law to count such votes,” Lott noted.

The problem may have been even worse than the auditors found, given that county employees told auditors that some of the envelopes may have been double-counted. Ironically, Missoula County Elections Administrator Bradley Seaman tried to wave away the lack of ballot envelopes by saying that a “double-check process” had been part of the reason for the numerical discrepancy.

According to Lott, when Rhoades told Seaman that election staffers thought they had undercounted the number of missing envelopes — leading to the possibility of a larger discrepancy, not a smaller one — the lawyer said “Seaman appeared extremely nervous and had no explanation.”

There were further issues beyond the envelopes, too.

“Auditors also tested a smaller, random sub-sample of 15,455 mail-in envelopes for other defects,” Lott wrote. “Of these, 55 lacked postmark dates, and 53 never had their signatures checked — for a total of 0.7% of all ballots in the sample. No envelope had more than one irregularity.”

Another major issue was the fact “[d]ozens of ballot envelopes bore strikingly similar, distinctive handwriting styles in the signatures, suggesting that one or several persons may have filled out and submitted multiple ballots, an act of fraud.”

One auditor found that 28 of these ballots, with signatures that looked “exactly the same,” came from a single address — a nursing home, Lott wrote. Another auditor said she saw two different, distinct signatures that kept recurring on the envelopes she reviewed. . . .

Another listener referenced the article on Real Clear Investigations about the alleged voter fraud in Missoula County.

“I spoke with Secretary of State Christi Jacobson the other day,” he said. “Ultimately, we have to have elections where we can rely on the results. I know she has been sponsoring a number of bills in the legislature. I look forward to signing them into law and that will make sure that we have accurate election results. I recently repealed the prior Governor’s executive order that mandated all mail in ballots, so we’re going to go back to polling places. I think it’s much easier to assure integrity when we do that.”

And, even though both the left-leaning Washington Post and right-leaning gun research John Lott have both debunked the myth that white supremacist Dylann Roof could have been denied a firearm if his background check had last a few days longer, Berman called it “common sense” that Democrats are pushing for the FBI to be allowed additional days to conduct a background check before approving a gun sale

“Look, the same lies and misinformation that were used to try and counter the passage of the Brady Law 27 years ago when that law went into effect — we’re seeing them all recycled again around HR8 and HR1444 — things like ‘background checks don’t work.’ You know what — 3.5 million sales of guns have been stopped by our system, but we could do even better, and that’s the point.” — Kris Brown from the Brady Campaign on MSNBC

But right-leaning crime researcher John Lott has argued that most background check rejections have been false positives that delayed law-abiding citizens from buying guns.

There seems to be little doubt if for nothing more than obvious but anecdotal evidence, that voter fraud seems to be demonstrably worse in Democrat strongholds. Combining that with mail-in ballots this year was a recipe for disaster in Missoula, where an audit has revealed anomalies that cannot be explained by anything but intentional and criminal voter fraud.

Real Clear Investigations wrote the report that should have anyone in Missoula County sharpening pitchforks and lighting their torches, at least if they were as concerned about election security as they are renewable energy goals.

In a statement, Girod referenced one study from the Crime Prevention Research Center which claimed that less than .0074% of Oregonians with concealed handgun licenses have committed felonies over the past decade. The study was authored by John Lott, a former Trump administration official and staff member at the conservative American Enterprise Institute think tank [Error].

“Let me be clear, this radical policy does absolutely nothing to solve gun violence or make communities safer,” Girod said. “It will make it worse. Democrats have brought forth zero evidence that this will do anything except criminalize responsible Oregonians.”

In an April 10, 2020, commentary in the Wall Street Journal, John R. Lott Jr. quotes a report of the Commission on Federal Election Reform, chaired by past President Jimmy Carter, which warned, “Absentee ballots remain the largest source of potential fraud.” Yet today’s goal of H.R. 1 is to double down on mail-in voting in all 50 states.

Another association that can be found when examining data has been explained by author John Lott as “more guns, less crime.”

John Lott, the famous researcher on the effects of legal concealed carry, has often written that minorities in crime-ridden urban areas, show the most benefit from an increase in the legal carry of firearms.

My research has demonstrated that the two groups that benefit the most from carrying guns are the likeliest victims of crime (poor blacks in high-crime urban areas) and people who are physically weaker (women and the elderly). Dozens of published peer-reviewed studies find similar results. —Dr. John Lott, Jr.

There is a long-standing soft racism belief that minorities cannot be trusted with guns. That racism is strong in Chicago.