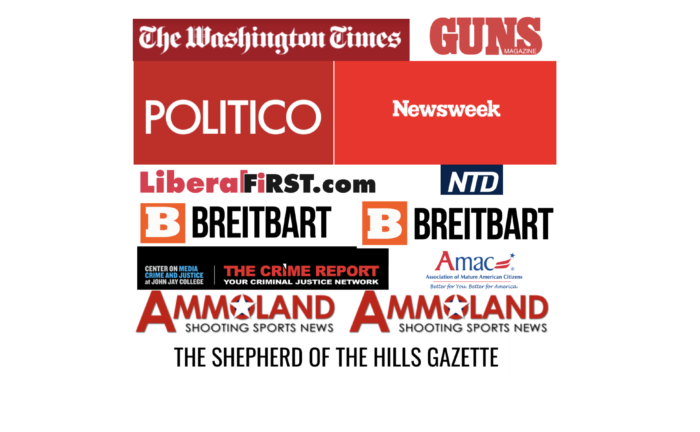 “During President [Donald] Trump’s administration, the number of concealed handgun permits has soared to over 19.48 million—a 34 percent increase over 2016,” according to a Crime Prevention Research Center report released in October.

Reasons suggested for the soaring firearms sales included uncertainty amid the ongoing COVID-19 pandemic, the U.S. presidential election and civil unrest seen in recent months across the country.

The report also noted 17 states “no longer provide data on all the people who are legally carrying a concealed handgun because people in those states no longer need a permit to carry.”

As Ling appeared as a guest on Sunday’s CNN Newsroom to promote the episode of This Is Life, host Ana Cabrera repeated the myth that mass shootings do not occur in other countries: “You say, in the show, this is a uniquely American club — a uniquely American situation. I’ll ask the same question we ask really every time something like this happens. What did you learn about why this keeps happening here?”

In her response, Ling denied that the show was “entirely anti-gun” and then blamed mass shootings on a lack of strict gun regulations:

Well, look, Ana, you know, this piece tonight isn’t entirely anti-gun. In fact, there are people in this episode who aren’t even against guns. But I think that we can all acknowledge that it’s just too easy to get firearms in this country, and it’s too easy for people who want to do harm to get firearms. So there are people in this episode, like Sandy and Loni, for example, who are just pushing really hard for more federal uniformity when it comes to background checks and waiting periods. And they would like to see the same laws apply to guns as driving and purchasing vehicles, for example.

But, according to right-leaning crime researcher John Lott, other countries have had disproportionately more problems with mass shootings than the U.S.

Justice Department observers are watching to see whether William Barr’s final days as attorney general produce new hurdles for Biden appointees who will take the keys on Jan. 20, Politico reports. The end of an administration typically brings a wave of departures. Curious late-term arrivals have prompted questions about whether the Justice Department has surprises in store. Controversial economist John Lott, who has long promoted more widespread gun ownership, was hired at the Office of Justice Programs as a senior adviser. He’s been the target of complaints from Democrats. . . .

With Attorney General Bill Barr about to leave the Department of Justice before Christmas, Politico ran a story on how Barr is going to close out his term. What is the media’s #1 concern for his remaining time in office? Under the topic of “Personnel,” it is the CPRC’s former president John Lott.

In October, a controversial economist who has long promoted more widespread gun ownership, John Lott, was hired at the Office of Justice Programs as a senior adviser for research and statistics. He’s been the target of complaints from congressional Democrats, who’ve criticized his research methods and disputed his findings.

Josh Gerstein and Kyle Cheney, “How will Barr close out his time at Justice?” Politico, December 15, 2020.

“The single greatest achievement in your presidency will be exactly what you’re doing right now. Voter integrity for our nation,” said Trump. “If we don’t root out the fraud, the tremendous and horrible fraud that’s taken place in our 2020 election, we don’t have a country anymore. So with the resolve and support of the American people, we will restore honesty and integrity to our elections, and we will restore trust in our system of government.” . . .

Moreover, Lott stresses that black people benefit even more from “Stand Your Ground” in urban neighborhoods, where it’s far more likely for one to need to defend themselves from an attacker. “Blacks living in high-crime urban areas are the most likely victims of violent crime and the most likely beneficiaries of Stand Your Ground laws.”

After citing the benefits blacks derive from “Stand Your Ground,” Lott noted, “Blacks are disproportionately affected by rules that make self-defense more difficult.”

“The NRA-ILA reported figures from the Crime Prevention Research Center (CPRC) showing there are more than 19.48 million concealed carry permit holders in the USA, including 820,000 permit holders who were added in 2019 alone,” Hawkins continues. “The near-20 million permit holders represent a 34 percent increase over 2016 figures.”

There are nearly 20 million concealed carry permit holders in the United States and perhaps untold millions more who carry every day in the 16 states that don’t require such permits.

. . . figures from the Crime Prevention Research Center (CPRC) showing there are over 19.48 million concealed carry permit holders in the USA, including 820,000 permit holders who were added in 2019 alone.

The near-20 million permit holders represent a 34 percent increase over 2016 figures.

When a California gun control advocate went on the warpath in The Hill criticizing the hiring of author and firearms researcher John Lott as an advisor to the Justice Department’s Office of Justice program, the reaction was swift in defense of Lott’s work.

Griffin Dix, president of the Oakland/Alameda County Brady Campaign chamber and a former trustee of the Brady organization declared research done by Lott, author of “More Guns, Less Crime” was flawed. Dix said Lott’s “research and conclusions were found to be false by a number of well-respected researchers, such as John Donohue of Stanford; Donohue and Ian Ayers concluded in The Stanford Law Review that Lott’s thesis was “without credible statistical support.” He claimed that Lott’s “track record is cringe-worthy.” . . .

First came Andrew Pollock, who succeeded Lott as president of the Crime Prevention Research Center in November. He countered, “In this case, it’s true enough that Donahue et al found in a 2003 study that guns were associated with increases in crime. But a review of their work, also published in the Stanford Law Review, argued that Donahue and his partner ‘simply misread their own results … Their own most general specification that breaks down the impact of the law on a year-by-year basis shows large crime-reducing benefits.”

He was followed two days later by Michael R. Weisser, whose short bio notes he “wrote a weekly gun-violence column for Huffington Post and is a Patriot Life Benefactor member of the NRA,” observed this about Dix’s critique: “(It) reflects the continued inability of the gun-control advocacy community to address the fundamental issues that prevent us from making an effective response to the problem of gun violence.”

Back in October, the Crime Prevention Research Center updated its annual estimate of the number of active concealed carry licenses in the U.S., and it was startling. We discussed the report at that time.

In the past year, despite the Coronavirus-related shutdown of the permitting process in many states, the number of carry licenses jumped by an estimated 820,000. At the time the report was published, CPRC said there were at least 19.48 million legally licensed armed citizens, which doesn’t include people in states that allow Constitutional Carry. . . .

As economist John Lott and co-author John E. Whitley observed in The University of Chicago Law School’s The Journal of Law & Economics:

It is frequently assumed that safe‐storage gun laws reduce accidental gun deaths and total suicides, while the possible impact on crime rates is ignored. We find no support that safe‐storage laws reduce either juvenile accidental gun deaths or suicides. Instead, these storage requirements appear to impair people’s ability to use guns defensively. Because accidental shooters also tend to be the ones most likely to violate the new law, safe‐storage laws increase violent and property crimes against law‐abiding citizens with no observable offsetting benefit in terms of reduced accidents or suicides.

Twelve years ago, Nikki Goeser watched helplessly as a stalker murdered her husband in cold blood. Tragically, at the time, she was a concealed carry permit holder, but state law forbade her from bringing her firearm into the restaurant where her husband was killed.

“It changed my life totally,” Goeser said. “I was just an ordinary lady living my happy, ordinary life that I loved. We see these things on the news, and think it happens to other people, but it happened to me. I don’t want anyone else to have to go through something horrible like that.”

Goeser went on to become an outspoken gun rights advocate and wrote about her experience in her book, Stalked and Defenseless.

Indeed, with more than a century of experience we know that gun control does not reduce crime but rather increases it, as John Lott has demonstrated. According to Lott’s evidence and that of independent researchers, no form of gun control has positive effects and most forms have negative effects on crime, murder, and mass shootings. Indeed, the most noteworthy policies that improve these problems are the elimination of gun-free zones and the expansion of concealed carry laws.

Professor John Lott wasn’t, and isn’t, a “gun guy.” Rather, he is a pragmatic voice of reason on the terribly polarized debate on gun owners’ civil rights.  PLEASE READ what he has to say about where a Biden/Harris Presidency would take those rights, here.

And PLEASE READ ALSO Dr. Lott’s commentary on what Biden would do with the highest court in the land in this regard, here.

Massad Ayoob, “WHAT A BIDEN-HARRIS PRESIDENCY WOULD DO TO US,”Backwoods Home Magazine, October 20, 2020.

The post CPRC in the News: Newsweek, Washington Times, Politico, Breitbart, and many others appeared first on Crime Prevention Research Center.