Hillsborough County, Fla. — For four minutes, Florida deputies begged and pleaded with a suspect at gunpoint to simply put his hands up before they were forced to use deadly force, video shows.

This shows the incredible challenges police officers face each day with very little understanding from people outside the law enforcement community.

Dylan Ray Scott — who earlier this year wrote a note to his mom saying he wanted to “die via Suicide by Cop” — was killed Tuesday night in Riverview during the dramatic standoff with police, who were there to arrest him on warrants for grand theft and resisting arrest, New York Post reported.

“No matter what videos like these show, there will still be people who will just call him a ‘killer cop,’” said Eugene O’Donnell, a professor at John Jay College of Criminal Justice and a former NYPD officer and Queens prosecutor — adding that it “underscores how uninformed” the debate on police shootings has become.

“Especially in this unforgiving climate, officers like this just get unfairly branded, and even 10 years from now it will be used against them if they are ever again made to use deadly force.”

Police body camera footage shows Scott racing away from a deputy who first stopped him, only coming to a halt after his pickup was T-boned by another car. (The other driver was able to get to safety.)

As officers ran up, he repeatedly warned that he had a gun in his waistband — and ignored the officers who spent almost long four minutes repeatedly pleading him not to make them shoot him.

“C’mon, man. It’s not worth it,” the initial officer, Hillsborough County Sheriff’s Deputy Timothy Miskell, pleaded as he pointed his service weapon and flashlight at the 27-year-old suspect, who had a history of attacking police, the Post reported.

“We do not take anything personally and I do not want to shoot you, but if you don’t show me your hands, that’s what’s gonna happen,” the deputy warned him. “Put your hands up. Please don’t make me do this.

“You are gonna die right there in that passenger seat if you don’t show me your hands,” he warned, offering to get him help.

“The warrants that you have right now, you’ll get a bond. But if you make a bad decision right now, it could cost your life.

Throughout the exchange, additional personnel could also be heard exhorting Scott, who had a lengthy rap sheet, to surrender and not reach for the firearm he said he had.

“You’ll be out of jail tomorrow, man, just show us your hands,” one called out.

Miskell told Scott “we’re good” — before a volley of shots from the deputies as the suspect suddenly lunged from inside the truck.

Scott was transported to Tampa General Hospital, where he died from his injuries, the sheriff’s office said. The driver in the minivan that T-boned him was also taken to a hospital, complaining of chest pains, the agency said.

There was no weapon found on Scott or in his pickup despite his claims to have one, according to the sheriff’s office.

Miskell, along with three additional deputies, Sgt. Michael Hannaford, Cpl. Steven Schneider and Deputy Devin Wooden, were all placed on administrative leave, which their boss stressed was purely protocol. 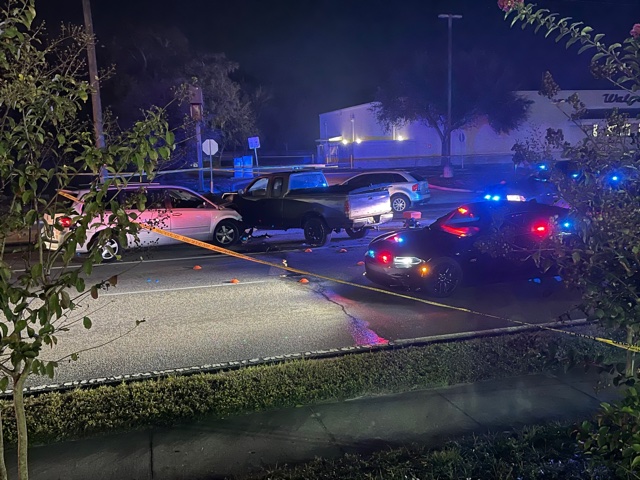 “These deputies did a textbook job of trying to get this suspect to surrender himself,” Sheriff Chad Chronister said.

“They pleaded with him to show his hands, stopping short of begging him not to reach for the firearm he repeatedly said he had.

“There is no perfect outcome in situations like this, but I am thankful that none of our deputies were hurt and that we were able to keep innocent citizens on the roadway safe as this situation unfolded,” he said.

Scott had a rap sheet that included burglary, drug possession and a slew of crimes against cops, including resisting an officer with violence, battery on a law enforcement officer, and fleeing and attempting to elude police.

At a press conference, the sheriff’s office revealed how Scott’s mother in the summer had reported that her son left a note saying he wanted to “die via Suicide by Cop,” the Tampa Bay Times said.

John Jay professor O’Donnell said the suspect had put the officers through a form of torture — one that leaves them “unfairly branded.”

He insisted there were “two victims,” saying, “This is an act of real cruelty to this officer that could leave some deep psychic wounding.

“It’s a big ask of a public servant to be forced into a situation where he has no choice but to snuff out another person’s life, especially when they’ve been face to face with them like this.

“It’s not unusual for officers to take this kind of pain to the grave,” he said.

Noting that studies have shown almost four out of every 10 police shootings are “suicide by cop,” O’Donnell said it was sadly not an “unusual” episode — but one ignored by anti-police protesters, the Post reported.

“No matter what, there’s going to be a cohort of people who believe that cops should wait until they get shot, that any preemptive force is inappropriate,” he said.

“These officers are our surrogates doing the hard things that we don’t want to have to do — and they often bear the costs to their death,” he said of PTSD often suffered by officers forced to shoot suspects.