A San Antonio firefighter who wrote ‘F— the police’ multiple times in a lengthy Facebook post in late August has been suspended 90 days without pay, SAFD suspension records show.

KSAT reports that Engineer Christopher Johnson was originally handed an indefinite suspension in early October, but it was later shortened to 90 days after Johnson met with Chief Charles Hood.

The Aug. 25 Facebook post, which Johnson said he wrote because of a culmination of issues going on in his life and following a police shooting of a suspect in another state, included the following:

From a place of disgust and shame, as someone who has only had positive interactions with the police – privilege – someone who [h]as family and friends that are cops, who works with cops, I say F— THE POLICE. F— the departments, and administrations, training officers, unions, and individual cops who despite everything, all the scrutiny, all the calls for change, still shoot and murder Black men and women and/or protect those who do. F— the police who have terrorized and traumatized and injured demonstrators and protesters that are speaking out against the same abuse and killings of Black men and women.

Johnson told Chief Hood several coworkers reached out to him after he made the post and said they appreciated what he wrote. 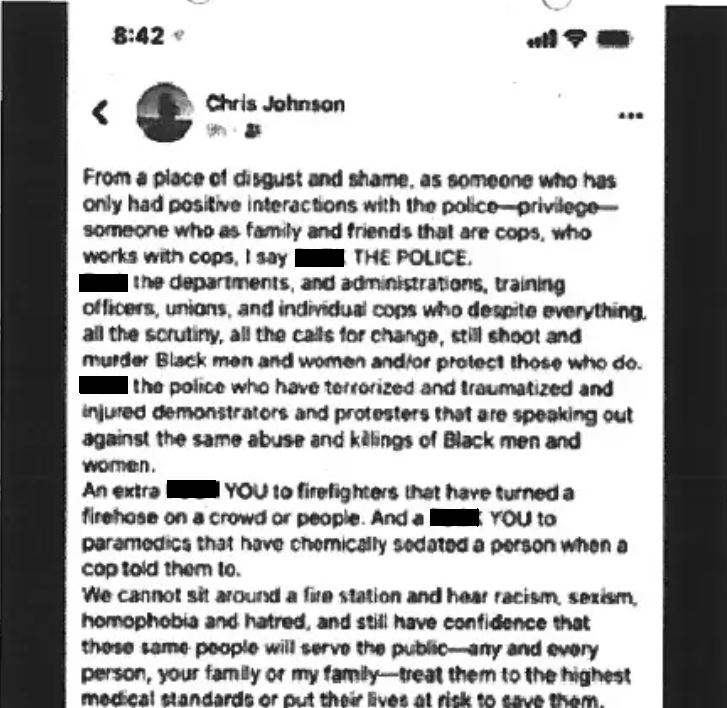 His suspension comes four months after Hood fired firefighter lauren Bienek for what he deemed a racially derogatory comment on social media.

Bienek was fired for commenting on a Facebook post “concerning using a vehicle to ‘plow’ through protesters,” according to previously released suspension records.

After Johnson’s Facebook post came to light, he wrote to Hood that he was “angry at news of another case of police excessive force that seemed to be racially motivated,” records show.

Johnson, in the handwritten letter, conceded that he “used language and terms that were inappropriate.”