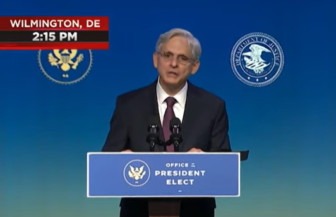 Attorney-General designate Merrick Garland promised Thursday to restore the political independence of the Department of Justice and reaffirm Watergate-era principles ensuring justice will be shielded from “partisan” aims.

Garland, who currently serves as a judge on the federal appeals court in Washington D.C., recalled that he first came to work in the Justice Department as a special assistant in the post-Watergate era.

He praised attorneys-general in that era for their work in restoring the guiding principles of a department that had lost credibility during the administration of President Richard Nixon.

“As anyone who watched yesterday’s events in the capitol should understand, if they don’t already, the rule of law is the essence of democracy,” Garland said.

”My mission as attorney general will be to reaffirm those polices and principles, and [ensure] that law is not the instrument of partisan purpose.”

Garland added: “These principles — ensuring the rule of law and making the promise of equal justice under law real — are the great principles upon which the Department of Justice was founded and for which it must always stand.”

The implicit rebuke to the previous administration’s Justice Department was underlined by President-elect Joe Biden in his remarks introducing Garland as his nominee.

“We need to restore the honor, the integrity, the independence of the DOJ of this nation that has been so badly damaged,” Biden said.

“I want to be clear to those who lead this department who you will serve: You won’t work for me. You are not the president’s or the vice president’s lawyer. Your loyalty is not to me,” he added. “It’s to the law, the Constitution, the people of this nation.”

Lisa Monaco, Biden’s choice for deputy attorney general and a former counterterrorism advisor to Obama, said that restoration of the department’s unfettered pursuit of justice is of key importance after the last four years.

“The soul of the Justice Department lives in the integrity of its career professionals, in the independence of its investigations and prosecutions and in the principles it brings to bear as it stewards the ideal of justice in America,” she said.

“What is most critical, I think, in the days ahead is not a challenge at all, but an opportunity,” Monaco added. “For this team, and for the career professionals that make up the Justice Department, to reaffirm its norms and traditions. To do justice without fear or favor.”

Video of Judge Garland’s remarks can be accessed here.