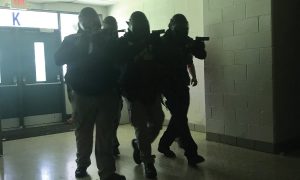 For the most part, officers are generally not accustomed to working as a team, unless they are part of a specialized unit. If a mass casualty incident (MCI) were to occur, it is more than likely that there would be a variety of personnel responding; patrol, traffic, investigators and even command. Most assuredly, these officers do not train together in team tactics. They have to be taught team tactics and more importantly, they have to practice team tactics.

Since the heartbreak at Columbine in 1999, many models and tactics have developed on how law enforcement should respond to a MCI. Initially, many agencies across the country opted for a team of first responders to arrive at the scene and then make entry using a “wedge” or diamond formation to move through an area to get to the shooter. This formation was derived from the military wedge formation and is used when the enemy strength and position are unknown. Many agencies still subscribe to this model.

As time passed, some agencies began to modify the wedge and evolved into the T-formation. This hybrid wedge formation performed the same objective as the diamond formation, however instead of having the flanks trailing slightly behind the point officer, the flanks were brought up abreast of the point officer to better protect the point officer as they crossed danger areas such as open doors or hallways. Although the formation is generic, agencies experimented with different ways of covering threat areas. Most everyone agrees that the point officer should be responsible for the area to the front and the rear guard covering the area to the rear. The deviation usually lies with the flanking officers. Some subscribe to the cross-coverage of each of the flanking officers, whereby the right flank covers the openings to the left and the left flank covers the open areas to the right. While this provides the flanking officers with a wider field of view when approaching openings, it leaves the point officer and the opposing flanking officer in a precarious position if one or both of those officers happen to move forward to engage a lethal threat. The other option — some argue, the preferred option — is to have the flanks provide security to their respective sides and eliminate the possibility of friendly fire.

Each officer in the formation is assigned an area of responsibility within the T-formation and that allows for 360-degree security. Ideally, the diamond or T-formation is comprised of four officers. As the number of officers are removed from the formation, the areas of responsibility are increased, and it becomes exceedingly more difficult as well as dangerous for the officers as they move past unsecured areas.

Multiple-officer response tactics can be applied to a single officer or even a pair of officers. This does not necessarily ring true when conducting singular officer response training. Some of the tactics taught for a multiple-officer response are the same as a single-officer response: quick peeks, cutting the pie (cornering), limited Israeli (only exposing the weapon and eye from a covered position), moving and shooting. As more officers are added to the formation, the coordination and communication become all that more critical. If officers do not practice the multi-officer response, they will not function cohesively while under stress. The result will add confusion and chaos during their response to a live MCI.

As we see an increasing number of MCIs occurring, law enforcement has found it was far more likely that a single officer is more than likely to engage a shooter at an MCI, rather than a group of officers arriving simultaneously. Proponents of the solo-officer response argued that these types of incidents are dynamic and short-lived. The argument states that an MCI puts innocent lives at risk while the officer waits for other officers to arrive. Further, that the perpetrators of these types of attacks are often of the “lone wolf” variety and take their own lives upon the first inclination that law enforcement has arrived on the scene. Studies have been conducted to back up these assertions stating that either civilians or single officers are the ones responsible for bringing some of these incidents to an end before more lives would have been lost. This points to law enforcement officers being better trained and equipped then their adversaries. While there are many truths to these testaments, there are also some assumptions that pose an increased risk to the solo-officer arriving at the scene. During a single-officer response, the officer does not have to concern themself with communicating and coordinating with other officers, but they do have to be conscious of their entire 360-degree environment as they move through lethal surroundings. Many of the solo officers that prematurely terminated some of these incidents did so at a cost and did not come out unscathed.

There is no question that at times a single officer has to take decisive action, even at the risk of his own life, to save the lives of innocents. When officers are called to this type of perilous event, no options should be taken off the table, but to embrace the single-officer response training as your sole answer to an MCI, leaves your officer(s) at a significant disadvantage.

We accept that these types of incidents carry a priority of life: hostages, innocents, officers, perpetrators. We realize, as law enforcement officers, that we took an oath to serve and protect and that our lives are placed in jeopardy to protect the lives of the innocent. However, that does not mean we have to take unnecessary risks. If we take a moment to assess the situation, gather intelligence, determine the most appropriate response, we may be able to save others’ lives while protecting our own. Train with the best practices from a variety of responses; be it one, two, three, or more officers. Regardless, we have a responsibility to ourselves, our families, our fellow officers and our communities to prepare for every contingency and to prevail in all!

Dan Danaher is a retired sergeant with 28 years serving with law enforcement. He is the co-founder of Tactical Encounters, Inc., a Michigan-based law enforcement training provider. Learn more at www.tacticalencounters.com.

As seen in the November issue of American Police Beat magazine.
Don’t miss out on another issue today! Click below:
SUBSCRIBE TODAY!

The post How does your agency prepare for a mass casualty incident response? appeared first on American Police Beat Magazine.