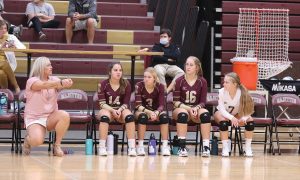 Caisee Sandusky is a school resource officer in North Dakota who loves getting the chance to work with students. So much so, she decided to take on a second job — as a volleyball coach.

Sandusky has been an SRO at Minot High School for the past seven years, and one of the highlights of the job is being able to build relationships with young people and help impact their lives. That same desire made her want to be an even greater presence in the students’ lives, so when a position opened to coach the school’s JV volleyball team, she jumped at the opportunity.

“If I can influence one person positively, I’ve done my job,” Sandusky told KXNET. “Whether it’s coaching or as an SRO, if I’ve helped somebody, then I’ve done my job, and I feel good
about that.”

Taking over as coach has allowed her to get to know students and their loved ones on a deeper level. And while much of the student body already knew Sandusky due to her work as an SRO, once she started her second job, they started seeing her in a new light.

“You really get to know them and their families,” she said. “But also, for other kids within the school, they come to athletics, and they’re like, ‘I didn’t know you coached!’ And they’re like, ‘Oh, that’s so cool!’ So, it’s nice for them to see you outside the uniform.”

The position was a particularly good fit because Sandusky has loved volleyball for most of her life. She played in high school and throughout college, and one of her favorite memories is the bond she formed with her coach. That relationship inspired her to be who she is today.

When Sandusky is roaming the halls in uniform as a SRO, some students admitted to being a bit hesitant to approach her. They initially found her intimidating, as some students do when they have a uniformed officer at school.

“She looks intimidating at first, but once you get to know her, she’s very nice and genuine,” sophomore Grace Rood said.

“She’s a really great person. I know she does come off intimidating, but she’s funny,” senior Reese Terrel added.

Once Sandusky sheds the uniform and shifts to her coaching duties, that perception changes.

“It doesn’t really feel like a coach relationship, it kind of feels like a family-friend relationship,” junior Sofia Egge said.

While Sandusky said her coaching style is firm and she has high expectations for her players, the final score of a match isn’t that important to her. It’s all about getting the most out of each player.

Adds Egge, “She definitely wants us to do well. She wants what’s best for us, but she doesn’t expect us to be perfect all the time, which I understand.”

“I want them to realize, ‘OK, I need to make this change. If coach says this, I need to do this,’” Sandusky said. “But hold them accountable for their actions on the court, off the court, all those different things.”

That support and focus on accountability from their coach has helped her players, both on the court and off.

“That just really helped us to keep going and be aggressive, and I just love that she brought that out of me,” Terrel said. “Because now, I’m able to be aggressive and be a leader.”

Sandusky was quick to deflect some of that praise back to the players.

“I have been fortunate that I’ve had a lot of really coachable girls who want to succeed, they want to get better, they want to win and have fun,” she said.

Now the kids at school know her as both “Officer Sandusky” and “Coach Sandusky,” and no matter if she’s in uniform or on the court, she’s getting to do what she loves.

“I take pride in knowing that I have kids who look up to me or who feel like I’ve been an important, influential person in their life,” she said.

As seen in the November issue of American Police Beat magazine.
Don’t miss out on another issue today! Click below:
SUBSCRIBE TODAY!