The country as a whole has lost all sense of perspective, by which we mean people – mostly the media and democrats – are driving a panic to shut down the economy and control the populace.

Here’s something most people don’t know:

Do you know nine-out-of-ten people who have gotten tested? We don’t. We barely know four-out-of-ten and that’s mostly because the Department has been ravaged by COVID. Among our non-police friends it’s even lower…maybe two-out-of-ten. They aren’t sick and they aren’t traveling, so why get tested? ILDPH isn’t telling anyone how many repeat tests they’ve done, but no doubt it’s tens of thousands.

Do you know the fatality rates nationally? This guy does: 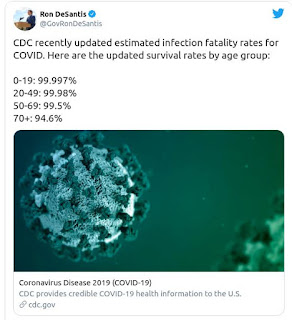 He’s the Governor of Florida and his state is open for business based on science.

How about some actual perspective? Our Stat Guy has some numbers:

There were a bunch of headlines Thursday reported more people died of COVID Wednesday than died on 9/11 – over 3,000. First off, they don’t report how many had extensive comorbidities, nor how many fell into the elderly category. Do you know how many people die in the United States every single day?

You’ve noticed a massive uptick in funerals? Even though you can’t go to the church services or the funeral homes, we haven’t noticed any more than usual. What we have noticed is a massive increase in boarded-up businesses. How is it that we notice that – which doesn’t affect us nearly as much as dozens more dead friends and relatives would?

Some troll, no doubt directed here by the Stan Rather scandal links, was spouting off about ICU’s being at capacity, morgues utilizing refrigerated trailers and doctors/nurses freaking out:

Perspective has been warped. Badly. It needs to stop. Sensible precautions are called for, but wholesale panic-mongering is not.