ALLIANCE, Ohio — A 24-year-old Ohio woman who was trapped inside a sinking minivan after crashing into a river Sunday night was rescued by quick-thinking police officers who jumped into the cold waters and pulled her to safety.

The woman had been driving an SUV east in the 600 block of River Street when she lost control, went off the road and landed in the waterway, which runs parallel with River Street, The Repository reported.

According to the Alliance Police Department, the woman fell asleep behind the wheel before careening into the Mahoning River.

As a result, she called for help from her cell phone and a dispatcher sent police and firefighters to the scene, while remaining on the line to keep her calm.

Police shared bodycam video of the dramatic rescue on Monday.

The woman retreated to the back seat as the water continued to rise inside the vehicle, the video shows. 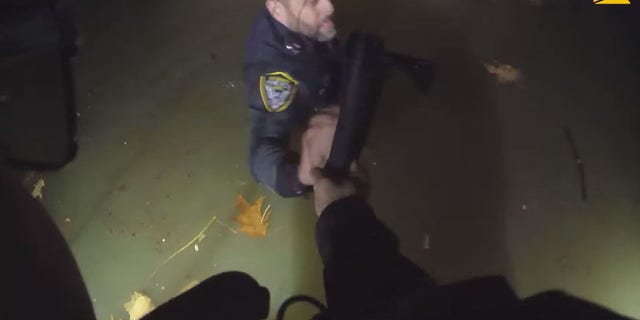 An officer holds onto another officer in the chilly river water while working to help the trapped woman.  (City of Alliance Police Department)

An officer in the river struggled in the cold water before breaking the rear window with a tomahawk and pulling the woman to the river bank, Fox reported. No one else was in the minivan.

“Her car was almost full of water when the officers pulled her out of the river,” Lt. Dave Bair told The Repository. “They communicated well and got her out of the vehicle. If these officers had been late by 30 seconds, I don’t know if she would be here.” 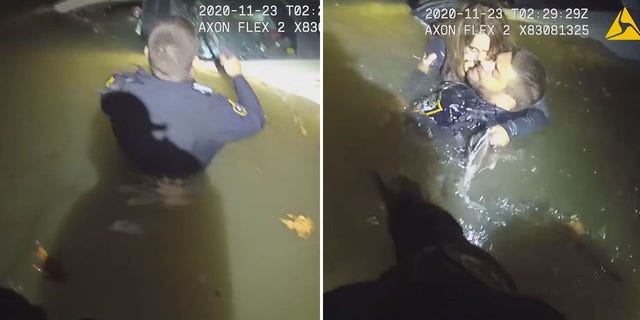 An officer used a tomahawk to break a rear window and pull the woman to safety. (City of Alliance Police Department)

Bair told the paper that he believed the river was about 6 feet deep.

Police identified the officers as Christian Tussey, Shane Tallman, Joe Amabeli, Chris McCord and Lee Rose, according to the paper. No officers were injured.

The woman was treated at a hospital for minor injuries and released, police said.