LOS ANGELES — The Jump Out Boys’ creed hailed their members as a brotherhood of Los Angeles County sheriff’s deputies who were foremost loyal to one another.

The typed manifesto, found in the trunk of a patrol car, said members understood “when the line needs to be crossed and crossed back.” They branded themselves with matching skull tattoos, with a special detail reserved for those deputies who had been in a shooting: smoke curling up from a revolver.

In 2013, seven members of the clandestine fraternity were fired, with top sheriff’s brass describing the initiation rites, symbolic tattoos and secret black book of shootings as “elements similar to those used to establish membership in a criminal gang.” Their tattoo “suggests street justice, and is associated with a rogue subculture,” the firing letters said.

But four of those deputies have won back their sheriff’s badges over the objections of the department, a Los Angeles Times investigation found. 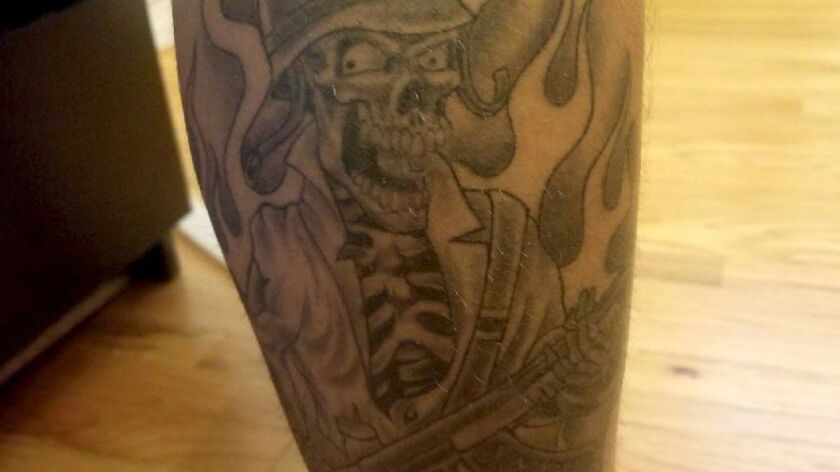 A Los Angeles County sheriff’s deputy inked on his calf with a skull tattoo associated with the Compton station. (Sweeney Firm/Glickman & Glickman)

The firings were reversed after the deputies and their union filed lawsuits and repeated appeals challenging the department’s action.

Although the four deputies bore tattoos of the clique, the county’s Civil Service Commission found no proof they subscribed to the creed and its rules and determined the firings were improper. Instead, the panel reduced their discipline to suspensions.

But all four went to court, arguing they deserved no punishment. And they won.

In July, a judge ruled in favor of the last deputy who had been contesting his suspension and ordered that any discipline be set aside.

Three of the fired deputies lost their appeals.