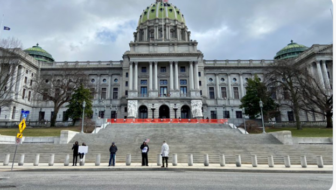 The “shock and awe” effect of thousands of National Guard troops and police appears to have dissuaded pro-Trump protesters from any major Inauguration Day disruptions.

“The message that was sent by law enforcement ahead of the inauguration was very clear, that there would be thousands of police officers and troops guarding these buildings,” said Brian Higgins, the former police chief in Bergen County, New Jersey, reports aol.com.

“I’m sure that is one reason why there haven’t been many protesters.”

Higgins, who teaches at the John Jay College of Criminal Justice, said that as investigators sift through the online postings of extremist groups, it is often difficult to separate actual plots from postings that are meant “to stir us up.”

Another factor, law enforcement sources said, was the “shock and awe” of the swift arrests by the FBI and the Justice Department of the pro-Trump rioters who ransacked the Capitol.

Another factor, law enforcement sources said, was the “shock and awe” of the swift arrests by the FBI and the Justice Department of the pro-Trump rioters who ransacked the Capitol.

There was exactly one pro-Trump protester outside the heavily fortified New York state Capitol in Albany.

“I was coming out to hopefully join a bunch of peaceful protesters in supporting the cause, that is almost a lost cause now, unfortunately, I’m sad to say,” Mark Leggiero, who was holding a Trump flag, told The Daily Gazette of Schenectady.

There was exactly one pro-Trump protester outside the heavily fortified New York state Capitol in Albany.

A group of protesters carrying signs against President Joe Biden and police marched in Portland, Ore., on Inauguration Day and damaged the headquarters of the Democratic Party of Oregon, reports the Associated Press.

Police said eight arrests were made in the area. Some demonstrators carried a sign reading, “We don’t want Biden, we want revenge!” in response to “police murders” and “imperialist wars.” Others carried a banner declaring “We Are Ungovernable.”

Portland has been the site of frequent protests, many involving violent clashes between officers and demonstrators, ever since the police killing of George Floyd in Minneapolis in May.  Mayor Ted Wheeler has decried what he described as a segment of violent agitators who detract from the message of police accountability and should be subject to more severe punishment.

In California, a small group of protestors got past a police barrier and began chanting outside the heavily guarded and fenced-off state Capitol in Sacramento. But they appeared to be antifa activists and could be heard denouncing Trump.

After the storming of the U.S. Capitol, the FBI sent a memo to law enforcement agencies warning about possible armed protests at all 50 state Capitols starting last Saturday, Jan. 16.

So when a small group of armed Trump supporters showed up Sunday at the Ohio Statehouse in Columbus to protest the election results, they were vastly outnumbered by law enforcement officers.

In Salem, Oregon, the few Trump backers were even more outnumbered by police officers and members of the National Guard.

And in Trump bastions like Oklahoma, the protesters simply failed to show.