I’m 57 now. It’s not like I’m giving up, but at this point, there are things I know about me: I’m always going to be type-A. I’m always going to bite my fingernails. Short of starvation diets, I’ll always carry a bit of fat on my belly. Here’s what I also know about myself: If I didn’t have workout partners, my efforts would be half as often and half as productive.

So how about you? When you watched the clock pass midnight, how many of those top tens at least crossed your mind? I think most of us would say several. We all want contentment, and each of those popular resolutions seems to point to that big hope. But here we are again; only a few weeks later, and not too much is changing for the better.

Left alone, it probably won’t. Everybody agrees: 2020 sucked, especially for cops. With the continued media anti-law enforcement spin and the cultural shift in values, the societal fuel for that forest fire has been accumulating for years now. Sadly, I don’t think 2020 was the apex. Things aren’t going to magically start getting better, and it could get worse.

At least the law enforcement training industry has taken notice. There are lots of new self-help and resiliency-type classes being funded in every state. My buddy went to a great one last year. Most of the students left fired up about the positive changes they could make. But, he said, after the buzz wore off, nothing changed.

As you may know, after you’ve done this job for a while, it’s really hard for trainers to expose you to something life-changing. What my buddy experienced was “hope-projection” fueled by in-the-moment encouragement. Preachers do that, too, causing the same emotional tug that gets us to write down resolutions once a year. But once the swelling goes down and the passion fades … it’s back to the same old grind. 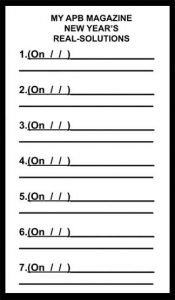 Let me share with you just how you can take some real steps towards that universal goal of contentment. Remember how I said my workout partners hold me accountable? Without the friendship, without the good conversation and without the encouragement that comes with every single workout, I wouldn’t look forward to them, and I wouldn’t try as hard either. From experience, I know that when I work out alone, both my time investment and my productivity are about half. And that’s for a lifelong habit. We’re relational beings. If I tried to start one of those unhabituated top tens and had to do it alone, it’d probably be about as effective as my buddy’s resiliency class.

Of course, you should continually pursue personal growth that leads to contentment, but how about following a realistic path for achievement? That’s what I’m about to give you.

First, pick seven realistic things that on-duty, off-duty or both will help you realize more contentment. Why seven? Seven happens to match our capacity. Studies have proved that’s the most we can retain in short-term memory. But also (if you’re into it), for some divine reason, seven has sacred meaning in almost every major religion (i.e., the seven days of creation and rest, the Book of Revelations’ seven churches/angels/seals/trumpets/stars, the Koran’s seven heavens, Hinduism’s seven higher worlds, Buddha’s seven steps, and more). Finally, seven is the most chosen favorite number worldwide. If I’m right about the shitstorm not being over for us in 2021, I say we seize every talisman and lucky charm we can find.

Now, about the goals. Unlike those most-popular new year’s resolutions, you need to be more specific. Instead of “exercise more,” it could be “ride my bike at least 45 minutes three times a week.” “Save money” would become “have $5,000 in savings by December 31,” and so on. But also think of indirect things that will lead to those same contentment goals. Famous psycho-therapist Victor Frankl’s epiphany was that mankind’s common pursuit is finding and fulfilling our purpose (be sure to read Frankl’s book, Man’s Search for Meaning). For example, think of a local nonprofit that you believe in and then volunteer to be on their board of directors. Many of these organizations want and need the type of awareness and wisdom that their local cops can uniquely bring, and they’d prize having you help them lead. The idea here is, because the payoffs will spread wider and therefore your commitment will be stronger, come up with relational things that will increase your purpose and make you a better person/cop/spouse/friend — things that, over time, will grow your character. That’s the kind of stuff that will have more staying power and bring lasting contentment.

Let’s take this in three steps:

I know that you want to be able to do your job for the long haul and that you hope to avoid as much personal attrition as possible. So, I’m asking you: identify some real-solutions that will armor your life, get accountability partners, measure your progress and keep your goals in the forefront of your mind.

Go hit the streets. Even if 2021 is another shitshow, you made a noble choice to serve mankind. If it seems that nobody appreciates your good work, that just makes it all the more noble. Because here’s what I do know: You’re making a beneficial difference in the world. Your family knows it, and I hope you do too.

The post So much for those New Year’s resolutions, eh? appeared first on American Police Beat Magazine.