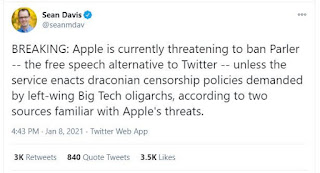 Twitter and Facebook are banning any discussion….simply discussions….about election fraud. They’re coming for anyone with an alternative viewpoint, even as a discussion. Google App Store has also deplatformed right leaning app Parler.

We imagine everyone saw the speeches yesterday? All outrage and “insurrection” and traitors and other inflammatory language? Does anyone know what the actual dollar amount of damage that was caused?

But dems and lefties are talking like there was another Federal courthouse burned in Portland, a building leveled by a truck bomb in Oklahoma City, maybe some airliners crashed into New York skyscrapers. Almost like their scripts were written for an incident that never lived up to expectations.

And this video showing Capitol Hill Police opening a side door for “protestors”?

Another link to see it. Pause the video at 26 seconds – there are at least four officers (two without masks!) standing in the side hallway who made zero effort to block or restrict the “invaders.”

Officers of all people should be seeing this video and asking, “What the actual fuck?” CPD just went through the worst rioting in a generation, and we pointed out time and time again, the failure of leadership to take the simplest precautions and measures to blunt the worst of it.

Better view that video before it gets taken down.

They’ll be coming after the blog shortly. Count on it.