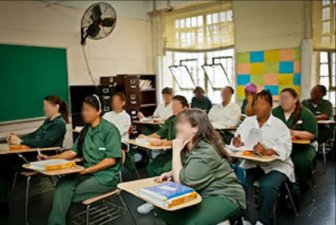 A college-level class at the Taconic Correctional Facility for women in Bedford Hills, N.Y.. Courtesy Hudson Link for Higher Education in Prison

Buried in Congress’ $1.4 trillion, 5,593-page omnibus spending bill in December was a long-awaited move: the reinstatement of Pell Grants for incarcerated students.

“The significance of the move cannot be overstated,” Margaret diZerega, director of the Vera Institute of Justice’s Center on Sentencing and Corrections, one of the key organizations which  have been lobbying for reinstatement.

But educators, advocates and former participants cautioned in interviews with The Crime Report that the program could be a victim of its own success unless administrators ensured sufficient infrastructure was in place for participating educational institutions, and that it wasn’t vulnerable to exploitation by for-profit colleges “looking for an easy buck.”

The grants are a form of federal financial aid typically awarded to low-income undergraduates and, with few exceptions, do not have to be repaid.

Incarcerated students were deemed ineligible for the grants in 1994 as part of the Violent Crime Control and Law Enforcement Act, which then-Sen. Joseph R. Biden (D-DE) championed.

DiZerega explained that, once implemented, the universal Pell program will “have tremendous impacts in terms of improved safety during incarceration and after incarceration, increasing opportunities for people post-release, and helping people to gain the skills and knowledge they need to take care of their families.”

She made clear that not only will universal Pell help adults in prison, but it will also help their children.

“When [formerly incarcerated] people are talking about college with family…they are able to share information about what it takes to enroll in college and what is financial aid,” DiZerega said.

“Opening up access to educational opportunities sets up people on a different trajectory in terms of their earnings and career, which is important for both generations.

“The reinstatement of Pell for all is just wonderful.”

Universal access to Pell Grants, according to Wheeler, will reduce recidivism and help currently and formerly incarcerated individuals, their families, and their communities.

Wheeler said many details surrounding the implementation of universal Pell must be worked out, but she believes the application process for incarcerated students will be as follows: he/she must first notify the prison’s education department of his/her interest in a Pell Grant.

The education department will then conduct an internal process to determine whether the incarcerated individual is eligible to take classes.

If the department deems the student eligible, the student must apply to the college he/she wishes to attend.

As one might expect, the student does not have the universe of higher education institutions to choose from.

DiZerega explained that incarcerated students are limited to the colleges that decide to extend their services to prisons by partnering with individual correctional facilities or state departments of corrections.

Of note is that Congress’s December spending bill simplified and shortened the FAFSA – from 108 questions to just 36.

This streamlining, Wheeler said, “can only be a benefit for most people.”

DiZerega explained that incarcerated students will be eligible for the maximum Pell Grant award, which will be $6,495 in the 2021-2022 academic year.

December’s spending bill stipulates that the re-establishment of universal Pell will be implemented by 2023 – when the maximum award is estimated to be $6,795.

DiZerega added that the college in which the student is enrolled will access his/her Pell Grant to cover tuition, books, and supplies.

While DiZerega and Wheeler said they were excited about Congress’s decision, they said the expansion of Pell Grants gives themselves and other individuals in the prison education space cause for concern.

One such individual is James Jackson, a formerly incarcerated college graduate.

Jackson works at The Evergreen State College in Olympia, Wa., where he provides support to formerly incarcerated individuals.

Among other things, he teaches individuals basic computer and internet searching skills, helps them select and enroll in a college, and connects them with on-campus resources, support systems, and housing.

Jackson is uniquely positioned to help people navigate their post-prison education because he was a student both during and after his incarceration.

Jackson, who received Washington Gov. Jay Inslee’s Civil Leadership Award in 2019, told The Crime Report, “Many online, for-profit colleges may be more interested in profit rather than helping vulnerable students.”

He warns that such colleges will rob incarcerated individuals of the “true classroom experience” and the “comprehensive, holistic education” they need.

“We always have to remember these schools are businesses first.”

For this reason, Jackson said, universal Pell may “draw flies looking for an easy buck.”

Meanwhile, Wheeler expressed concern that once universal Pell is implemented, colleges will rush to provide education in their local prisons before putting in place the necessary infrastructure.

“I hope the institutions that are interested will have…the right community partners in place, including the voices of the formerly incarcerated, and a deep commitment to ensure that whomever they enroll will have the necessary support to complete their education.”

Wheeler also warned colleges seeking to teach in prison that they “cannot copy and paste what works in the traditional brick and mortar institution into whatever other space, whether it’s online or in a prison.

“You want to be making sure that you are not only having conversations with the correctional facilities themselves but also with currently and/or formerly incarcerated individuals, especially if they have been students themselves.”

She cited academic advising, writing tutors, access to research materials, and computer labs as some of those resources.

Additionally, DiZerega and Jackson mentioned that even though the Pell ban has been lifted, several other barriers to higher education remain. 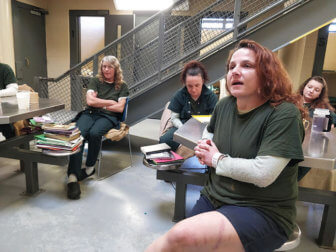 A program started within the Floyd County jail has space for 16 women to work on life skills, education, self-esteem and addiction issues. Photo by Aprile Rickert, News and Tribune .

Meanwhile, Jackson said that many obstacles to education are “created by the prisons.”

For example, there may not be enough physical space for classrooms, and the “culture in prison…is punitive rather than rehabilitative” – which may further dissuade incarcerated individuals from seeking a college education.

Jackson noted that incarcerated students’ access to higher education is subject to factors beyond  their control – namely, the willingness of their state’s government, their prison, and nearby colleges to offer such opportunities.

Believing in the Future

As an example, Jackson recalled when he helped a former gang member who spent 25 years in prison.

The man obtained a technical degree while incarcerated, and Jackson helped him enroll in The Evergreen State College upon his release.

Jackson also recalled his own experiences with prison education.

He went to prison at the age of 36, having dropped out of school in the ninth grade.

Because he was able to take classes while incarcerated, Jackson got his GED and completed two quarters of college.

After being released, Jackson went on to complete his undergraduate education at The Evergreen State College.

Much more than a bachelor’s degree, Jackson said, “education gave me a little bit of hope and belief in myself – a hope for a better future and a belief in myself that I could actually learn.”

Margaret diZerega is the director of the Vera Institute of Justice’s Center on Sentencing and Corrections, and Dr. Belinda Wheeler is an associate professor of English at Claflin University.

Michael Gelb is a TCR justice reporting intern.  He welcomes comments from readers.